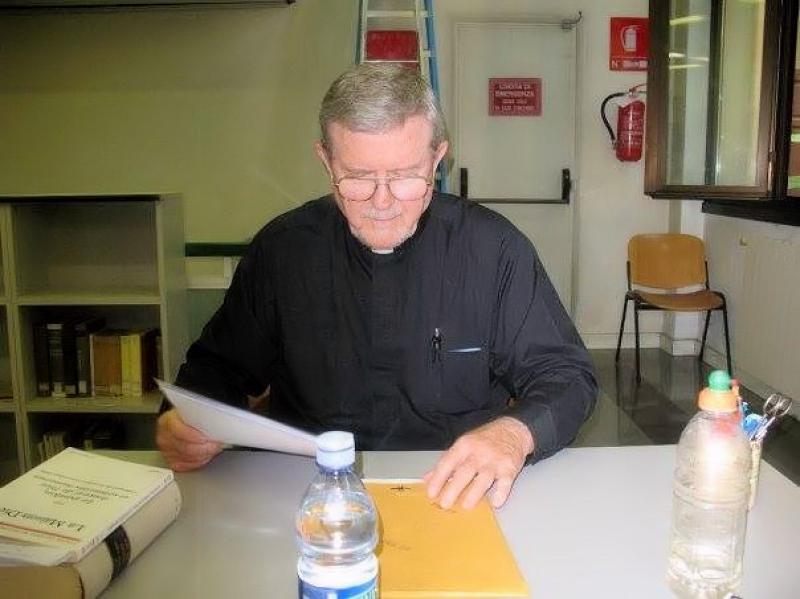 Robert Taft was before anything else a good priest and a faithful and faith- filled Jesuit. He was unfailingly prayerful both in private and in public, practicing liturgically what he spent most of his life writing and speaking about. He never failed to send a condolence to a Jesuit or any other friend who had a close relative die and he often sent a note on the anniversaries of those passings. His more popular theological writings reveal a man passionately devoted to Jesus Christ. I believe these are the first things he would want most to be remembered for.

Born in Providence, RI on January 9, 1932 and raised in nearby Cranston, Taft was educated by the Christian Brothers before he entered the Society of Jesus in 1949 at Shadowbrook in Lenox, MA. He spent four years there as a novice and junior (early college studies) before moving on to Weston College in Weston, MA for his philosophy studies. In 1956 he was sent to the Jesuit Baghdad Mission to teach English at Baghdad College, the Jesuit high school there. This was followed by one year of studying Russian at Fordham University and three years of theology back at Weston.

During his theology years Taft was able to realize a dream he’d had since his novitiate, transfer to the Byzantine Rite in the Greek Catholic (Ruthenian) Church. He was ordained in 1963 and spent the next year in the last phase of Jesuit formation, tertianship, in Drongen, Belgium. In 1965 he was able to realize another dream, studying Oriental Liturgy, which he did under the famous scholar, Juan Mateos, S.J., at the Pontifical Oriental Institute in Rome. After receiving his doctorate with a thesis entitled “The Great Entrance” on the preparation, procession and other rites associated with the gifts in the Liturgy of St. John Chrysostom, Taft studied oriental languages in Leuven for two years. He returned to the Oriental Institute in 1971 to take up a professorship in Oriental Liturgy, Coptic and Armenian. He was also for a many years editor of Orientalia Christiana Periodica, the institute’s scholarly journal. After stints as visiting professor in the liturgy program in the Theology Department of the University of Notre Dame and as a senior fellow at the Dumbarton Oaks Byzantine Research Center of Harvard University in Washington, DC, he returned to full time teaching at the Oriental Institute until his retirement in 2003.

During his time in Rome Taft also served as a consultor to the Vatican Congregation for the Eastern Churches. Perhaps his greatest contribution in that capacity was his assistance in the 2003 decision of the Pontifical Council on Christian Unity to recognize the validity of the Anaphora of Addai and Mari of the Assyrian Church of the East, a Eucharistic prayer which contains no literal words of institution. Taft was also honored as a Fellow of the British Academy and made a mitred Archimandrite of the Ukrainian Catholic Church in 1998. He often boasted of his privilege of wearing two pectoral crosses!

Taft was also very active in the promotion of liturgical scholarship worldwide. He was especially proud of his support of women in scholarship and ministry. He was a founding member of the North American Academy of Liturgy from which he received the prestigious Berakah Award in 1985, president of the international ecumenical Societas Liturgica, and also a founder of the Society for Oriental Liturgy.

Taft is of course best known as a prodigious scholar. His oeuvre contains over 800 titles. Although painstakingly exact in his scholarship he had the gift of being able to communicate in very readable English. He may be best known among North Americans for his magisterial study of the Divine Office in The Liturgy of the Hours: East and West: The Origins of the Divine Office and Its Meaning for Today, (2nd ed. Liturgical Press, 1993) and Beyond East and West: Problems in Liturgical Understanding (2nd.ed. Pontifical Oriental Press, 1997), the latter a collection of brilliant essays that any aspiring student of the liturgy should digest thoroughly. The final volume of his monumental five-volume history of the Byzantine Liturgy of St. John Chrysostom on the anaphora or Eucharistic prayer is in preparation. The first volume of that history on the Entrance Rites and Liturgy of the Word, which had been published in French by Mateos, is now being re-written by his last student and good friend, Sr. Vassa Larin.

Taft was known not only as scholar and master teacher, but also as a great wit and raconteur. He language was often salty and he could be acerbic with those he considered to be lacking in intelligence, learning, or good judgment. He was pleased when I often reminded him that underneath his gruff exterior lay a heart of stone! In fact he was really a generous, kind, and gentle soul, but didn’t want too many people to know it. He was indeed a very good friend to me and to many, many others who studied with him or came to know him through his work as a scholar and as a Jesuit priest.

Robert Taft retired to Campion Jesuit Health Center in Weston, MA, where he formerly studied philosophy and theology in 2012. He continued to write and speak until his health failed. In the summer of 2017 he received his final honorary doctorate (of many such honors) from the Ukrainian Catholic University of Lviv, which he helped to found.

Fr. Taft (or Taftie as he was known to Jesuits and many friends) died peacefully at Campion Center on November 2, 2018, appropriately the Commemoration of the Faithful Departed (All Souls). May this good man, priest and Jesuit rest in the peace of the Lord he loved and served so well.